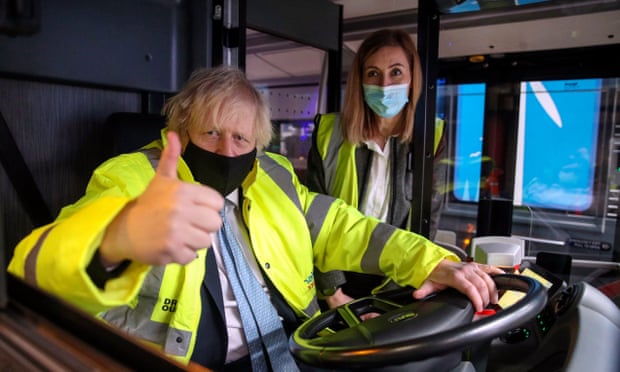 Boris Johnson is facing a growing backlash over his “levelling up” agenda as leaked documents on Sunday reveal that funding has been slashed in half for his favourite transport policy – improving bus services in more deprived areas including “red wall” seats.

The prime minister announced last year that £3bn would be spent on “new funding to level up buses across England towards London standards” as part of the government’s “bus back better” strategy. He said: “I love buses and I have never quite understood why so few governments before mine have felt the same way,” adding that “better buses will be one of our major acts of levelling up”.

But a letter sent to Local Transport Authority directors by the Department for Transport on 11 January – and obtained by the Observer – makes clear that the budget for the “transformation” of buses – a pot from which local regions can bid for funds – has now shrunk to just £1.4bn for the next three years.

The letter says this will mean hard choices for areas that had expected more, adding that “prioritisation is inevitable, given the scale of ambition across the country greatly exceeds the amount”.

The funding cuts have caused dismay behind the red wall and are an embarrassment for the government, particularly as a white paper on levelling up is expected to be published by Michael Gove – the cabinet minister in charge of the broad push to equalise standards of living across the country – within a fortnight.

The white paper has already been delayed, partly as a result of pressure from the Treasury to keep costs down. In his spending review last autumn the chancellor, Rishi Sunak, prepared the way for a reduction in spending on buses, but local transport leaders had still pinned hopes on the prime minister sticking to his word about £3bn for extra investment.

Figures compiled by the shadow buses minister Sam Tarry’s office show the amount of funding bids submitted by 53 out of 79 local transport authorities from the extra funding pot is already more than £7bn. This suggests the total is likely to exceed £9bn, against a total available of £1.4bn.

Local transport authorities and bus operators are already facing huge financial uncertainty as a result of the fall in passenger numbers and fare revenue during the Omicron surge, and lack of clarity from government over whether extra Covid-related funding will continue.

Tarry said last night: “The Tories promised ‘transformational’ investment in bus services. But millions of passengers are seeing managed decline. They’ve dramatically downgraded the ambitions of local communities. With bus services being slashed nationwide, this is proof that this government simply will not and cannot deliver for the people that need it most.”

The mayor of West Yorkshire, Tracy Brabin, said the decision to cut the funding for bus service improvement by more than 50% was a major blow. After losing out on long-promised rail investment – with the scrapping of HS2 and paring-back of Northern Powerhouse Rail – we in the north of England were counting on this funding, so we could deliver the green, reliable and affordable bus network our people deserve.”

The director of the Urban Transport Group, representing the transport authorities for the largest urban areas, Jonathan Bray, said: “We welcome any additional funding for buses given they are relied upon by those communities with the least and which are most in need of levelling up. However it is disappointing that the Treasury has substantially reduced the amount we were originally promised.”

Transport expert Stephen Joseph, a visiting professor at the University of Hertfordshire’s Smart Mobility Unit, said: “On buses, the Treasury isn’t counter-signing the cheques No 10 is writing. In fact the prospect seems to be of cuts, including in the red wall areas, rather than the expansion Boris Johnson has been promising.”

A Department for Transport spokesperson said: “It is incorrect to claim that funding has been cut from our original ambition. Over this parliament, the government has committed to making a step change investment of over £3bn into bus services.

“This includes £1.2bn in dedicated new funding to deliver improvements in fares, services and infrastructure, and a further £355m of new funding for zero emission buses.”