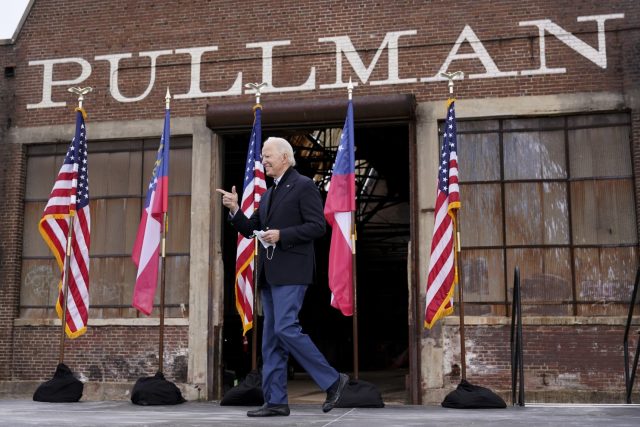 irishtimes– Joe Biden returned to the campaign trail on Tuesday six weeks after the US presidential election, stumping for Democratic Senate candidates Raphael Warnock and Jon Ossoff at a drive-in rally in Atlanta, Georgia.

The president-elect’s trip underscores the importance of next month’s Senate run-off elections, with both of the state’s two seats in the upper chamber of Congress up for grabs. Democrats need to win both if they are to take control of the Senate by the narrowest of margins.

“I need two senators from this state,” Mr Biden told the crowd, who honked car horns in support. “I want to get something done. Not two senators who are just going to get in the way. Because look, getting nothing done just hurts Georgia.”

Victories for both Rev Warnock, the pastor of Atlanta’s Ebenezer Baptist Church, and Mr Ossoff, a documentary film producer, would leave the 100-seat Senate split, 50-50, with Kamala Harris, the incoming US vice-president, able to cast a tie-breaking vote.

Mr Biden, Rev Warnock and Mr Ossoff were joined on Tuesday by Keisha Lance Bottoms, the Democratic mayor of Atlanta, and Stacey Abrams, the former state legislator widely credited with registering hundreds of thousands of black voters in the state, who are overwhelming more likely to vote for Democrats over Republicans.

“Stacey, if we had 10 of you, we could rule the whole world,” Mr Biden said on Tuesday. “God love you. You’re doing an incredible job.”

Mr Biden became the first Democratic presidential candidate in almost three decades to win Georgia on November 3rd. But with 5m votes cast, he prevailed by a razor-thin margin of just over 12,000 votes – and Democrats and Republicans agree that the Senate run-offs could be just as close.

According to a FiveThirtyEight average of recent opinion polls in the state, Mr Ossoff leads Mr Perdue by 1 point, and Rev Warnock is ahead of Ms Loeffler by 1.6 points, both well within the margin of error.

While the run-offs will be held on January 5th, early voting, both by mail and in person, has already begun, with almost half a million votes cast, according to the US Elections Project at the University of Florida.

Fewer voters tend to participate in run-offs than in general elections, but both Democrats and Republicans are predicting record turnout for the January vote given the unprecedented interest and the huge amount of money being spent on the campaigns.

“I think Georgia is going to shock the nation with the number of people who are going to vote on January 5th,” Mr Biden said.

More than 1.4m people have requested mail-in ballots, according to the US Elections Project, and turnout at polling stations for the first day of in-person voting on Monday exceeded that of the first day of voting for the general election.

Donald Trump has cast a shadow over the Senate races in Georgia, a state that he falsely contends he won on November 3rd. He has repeatedly attacked Mr Kemp and Brad Raffensperger, the Republican secretary of state who oversees Georgia’s elections, and claimed, without evidence, that the state’s voting systems are rigged.

Most Americans think Trump should be criminally charged for role in attack on the Capitol, poll finds