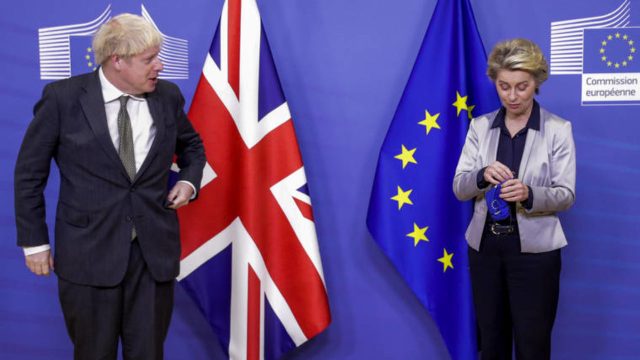 independent.ie- The EU’s chief executive has said that here had been progress on a trade deal with Britain and the next few days would be critical.EU Commission President Ursula von der Leyen confirmed that the major problems had been reduced to just two — fair competition in the EU market and fishing rights for EU vessels in U.K. waters.

“As things stand, I cannot tell you whether there will be a deal or not. But I can tell you that there is a path to an agreement now. The path may be very narrow but it is there,” she said.

“We have found a way forward on most issues but two issues still remain outstanding: the level playing field and fisheries. I am glad to report that issues linked to governance now have largely been resolved. The next days are going to be decisive,” she told the European Parliament in Brussels.

Britain and the EU are in the final stretch of tortuous talks to safeguard an estimated one trillion dollars of free trade beyond Dec. 31, when the United Kingdom completes its transition out of the world’s largest trading bloc.

Von der Leyen said discussions about access to UK fishing waters for EU vessels were “still very difficult” but negotiators had moved forward on the other most contentious element – guarantees of fair competition for companies.

“On standards, we have agreed a strong mechanism of non- regression. That’s a big step forward. And this is to ensure that our common high labour, social and environmental standards will not be undercut,” von der Leyen said, two weeks before Britain exits the EU’s single market and customs union.

“Difficulties still remain on the question of how to really future-proof fair competition. But I’m also glad to report that issues linked to governance by now are largely being resolved.”

While she said she sometimes felt Britain and the EU would not be able to overcome their differences, they would keep trying.

Failure to get a deal would damage economies on both sides of the English Channel, send shockwaves through markets, snarl borders and cause chaos in supply chains across Europe as it struggles with COVID-19.

Asked to comment on von der Leyen’s remarks, a British official said: “We’ve made some progress, but we are still very far apart in key areas. Still not there.”