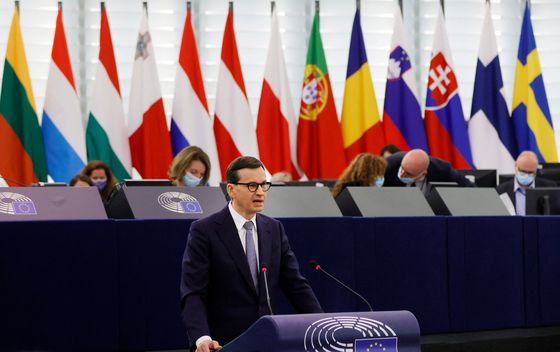 independent.ie– Angela Merkel is worried that some EU leaders and lawmakers are thrusting the EU into a fight with Poland that leaves no room for ­compromise and could end in ­disaster.

In her final weeks in the job, the German chancellor has warned about the EU’s tactics in the confrontation. Behind the scenes, she is concerned that the rush to strike back at Poland over a rule-of-law dispute could spiral out of control and end up with Poland’s exit from the bloc, said a person familiar with her thinking.

As Europe’s most powerful leader, Ms Merkel has often ignored those baying for immediate action and wielded patience as a political tool in negotiations to head off damaging outcomes. Having lived through Brexit, she believes carelessly tempting such prospects is reckless.

Her disquiet is about the EU’s current strategy and the increasingly confrontational attitude on both sides, which she believes could end up in a geopolitical catastrophe for the EU, bolstering authoritarianism in Poland and making the country more subject to outside influences. The person, who was granted anonymity to speak more openly about Ms Merkel’s world views, gave a rare insight into how the departing leader really sees things.

On the other side of the Polish issue are leaders such as Dutch prime minister Mark Rutte, who say the EU’s core values are at stake in this fight, which has seen Poland’s top court reject the primacy of the bloc’s laws. He and others insist the EU should be more than a pure economic grouping and focus more squarely on democracy, rule of law and equal rights. Ms Merkel’s likely successor, Olaf Scholz, and his social democratic party have seemingly aligned themselves to Rutte’s camp. But if Ms Merkel is right, the risks for Europe will increase.

For now, the prospect of Poland leaving the EU is remote, since the bloc is popular there and Poland remains dependent on EU funding. But the dispute is not going away any time soon.

Mr Morawiecki used an appearance at the European Parliament on Tuesday to blame the EU for overstepping its authority and of “financial blackmail”. European Commission President Ursula von der Leyen pledged the bloc would take action against Poland’s flouting of EU law.

With Ms Merkel about to step down, Poland will lose its most influential ally in the EU, and the bloc will lose a moderating influence who had prevented earlier crises with its eastern neighbours from escalating. She is pressing other leaders, in a series of farewell visits, to consider the larger consequences of pushing a powerful ally like Poland to the brink. She also views recent moves by Warsaw as ruthless, too aggressive and provocative.

Speaking on a visit to Belgium last week, Ms Merkel said the EU needs to find compromises without giving up on its principles. “We need to intensify our talks with the Polish government to find a solution – political problems can’t always be solved in court,” she said.

It is not only the face-off over the recent court ruling. Poland also faces fines over its judicial reforms and legal action over anti-LGBTQ+ laws that could see its cohesion funds blocked. Billions of euro in Covid-19 recovery funding to Poland and Hungary remain in limbo due to rule-of-law-related matters as both countries are seen to be choking fundamental freedoms.

After the Polish PM renewed his attack in parliament, some European lawmakers insisted the bloc had to take strong action. “What the Polish government is doing is an attack on the very existence of the European Union itself,” said Ska Keller, president of the Greens/EFA Group.

Ms Merkel has been criticised for shielding eastern European strongmen such as Hungarian premier Viktor Orban.

For the chancellor, who grew up in East Germany before the fall of the Berlin Wall, keeping the EU together is both essential and existential. For her, unlike for most other major EU leaders, the bloc will not be complete until the Balkan nations of south-eastern Europe are also members.