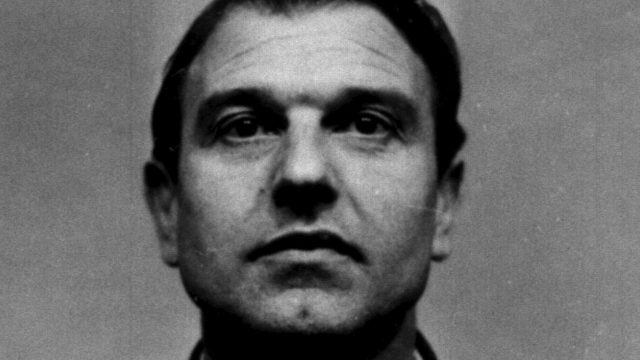 independent.ie– George Blake, a British intelligence official who betrayed closely guarded secrets to the Soviets and was among the most damaging traitors of the Cold War, then made a daring escape from a London prison in 1966 and lived out his days as a national hero in Moscow, has died at 98.

News accounts from the 1960s described Blake as a “Super Spy” and perhaps one secret to his successful treachery was that he hid in plain sight. As one of his friends, a Salvation Army executive, told a reporter at the time, Blake resembled “a typically blasé, bowler-hatted, rolled umbrella government official”.

In fact, he was the last high-profile survivor of a string of British turncoats who spied for Russia during the 1950s and 1960s, a badge of dishonour that included the Cambridge Four: Anthony Blunt, Guy Burgess, Donald Maclean and Kim Philby.

Dick White, a former chief of British intelligence, once said Blake wrought the most damage. The information he turned over reputedly led to the deaths of scores of highly placed Western agents, including Robert Bialek, a top-ranking East German police official.

He also betrayed to his Soviet handlers a joint mission between British and US intelligence known as Operation Gold. The goal was to dig a tunnel underneath East Berlin to tap Soviet phone lines in the early 1950s. Blake sabotaged the multimillion-dollar operation before a shovel had ever struck German soil.

“There was not an official document on any matter to which I had access which was not passed on to my Soviet contact,” Blake confessed at his closed-door trial in 1961, news accounts reported at the time. According to a CIA report, Blake passed more than 4,720 pages of classified documents to the Soviets.

Blake spent nearly a decade leading a double life before he was arrested, tried and sentenced to 42 years in prison for espionage. At his trial, the presiding judge, Lord Chief Justice Hubert Parker, said that Blake had “rendered much of [Britain’s intelligence] best efforts useless”.

Five years into his term, Blake escaped in the middle of the night using a rope ladder with rungs made of knitting needles. He was smuggled into East Berlin while hidden inside a secret compartment of a camper van and later travelled to Russia.

In his adopted motherland Blake was bestowed with the Order of Lenin, the highest civilian award in Soviet Russia. A countryside dacha, a Volga car and a pension, along with his ribbons for courage and dedication to the Communist cause, were the trappings Blake earned for his nine years of service to the KGB.

“It is hard to overrate the importance of the information received through Blake,” Sergei Ivanov, an official for the Russian Foreign Intelligence Service, told Russian media in 2007. “It is thanks to Blake that the Soviet Union avoided very serious military and political damage which the United States and Great Britain could have inflicted on it.”

He was born Georg Behar on November 11, 1922, in Rotterdam. His mother was Dutch, and his father was a Jewish businessman of Middle Eastern descent who earned British citizenship while fighting for the Allies in World War I. After his father died, his mother married a man with the last name Blake.

As a youth he spent summers with his family in Cairo. It was there, Blake later said, that his interest in communism was sparked by cousins with left-wing views.

During World War II, Blake served in the Dutch underground as a bicycle courier before making his way to Britain. He joined the British navy in the early 1940s and, because of his facility with languages, was recruited to British intelligence.

As a covert officer for the British Secret Intelligence Service – often called MI6 – Blake held posts in Vienna, Berlin, Milan and Beirut. He studied Russian at Cambridge and developed a specialty in the Soviet Union.

He was assigned to the British diplomatic mission in Seoul when North Korean forces invaded the city in 1950. Blake spent 34 months as a prisoner, subsisting on a diet of rice and turnips in a North Korean camp. With the other prisoners, Blake sometimes displayed his creative ability to take on personas.

“He loved to imagine himself… a great officer of the crown ennobled for gallant and devoted service,” journalist Philip Deane, who spent time imprisoned with him in North Korea, wrote in the Washington Post in 1961. “Lightly we would tap him on the shoulder and say solemnly: ‘Arise, Sir George.’ We promoted him to baron, earl, marquess. He never quite made duke; captivity ended too soon.”

Blake said his decision to spy for Russia came after witnessing what he described as atrocities perpetrated by the West. In the PBS documentary Red Files, Blake described watching American bombers obliterate small Korean villages.

“It made me feel ashamed of belonging to these overpowering, technical superior countries fighting against what seemed to me quite defenceless people,” Blake said in the broadcast. “I felt I was committed on the wrong side. And that’s what made me decide to change sides. I felt that it would be better for humanity if the communist system prevailed, that it would put an end to war, to wars.”

He passed a note written in Russian to his guards and was granted an audience with a KGB official, offering his services to the Soviets.

As a highly placed mole, Blake leaked secrets to the Soviets that few British spies were even cleared to know. Among the most damaging to be revealed was the Berlin tunnel operation.

Although the tunnel was built and the phone lines were tapped, no worthwhile intelligence ever resulted from the intercepts by the CIA or MI6. The projected ended up wasting the equivalent of $51m (€41.5m) in today’s money.

Instead the Soviets used the phone lines for a disinformation campaign. To protect Blake, they allowed the operation to toil for 11 months before the tunnel was ‘accidentally’ discovered after rainstorms washed up the handiwork of the British and American intelligence branches.

Blake’s downfall came after a Polish officer defected to the West and described – but did not identify – a top-ranking British officer who was a Russian mole. While posted to Lebanon, Blake was called back to MI6 headquarters under false pretences, accused and arrested.

His trial at the Old Bailey was considered so sensitive the judge ordered the courtroom vacated, the doors locked and windows shuttered.

Blake was found guilty, and his 42-year sentence was one of the harshest in British history for such a crime -Klaus Fuchs, the physicist who betrayed atomic secrets to the Soviets in the 1950s, was sentenced to 14 years.

In May 1962, as something of a prison celebrity, he received the sympathy of a pair of fellow prisoners at Wormwood Scrubs, peace protesters who been arrested for participating in a ban-the-bomb demonstration outside a US airbase in England, and regarded the length of his sentence as unjust.

The peace protesters – a university academic and an antiques dealer – agreed to help him escape, and after their release they remained in touch by a walkie-talkie smuggled into the prison by another inmate, Sean Bourke. The Limerickman acted as a link to Blake, and when he too was released, he continued to conspire on Blake’s escape.

On the night of October 25, 1966, the trio (financed by Oscar-winning movie director Tony Richardson) helped Blake make his jail break and arranged for a safe house, staying with a local clergyman.

As the police combed Hammersmith for the fugitive, Blake nursed the leg he had injured in his jump from the top of the prison wall. He was treated by a sympathetic doctor and shortly before Christmas was driven via Dover to East Berlin.

In 2007, Blake received the Order of Friendship from Putin. “You and your colleagues made an enormous contribution to the preservation of peace, to security and to strategic parity,” Putin said in 2007. “This is not visible to the eyes of outsiders, but very important work deserves the very highest acknowledgment and respect.”

No information on survivors was immediately available. His first wife, an Englishwoman with whom he had three children, divorced him after his defection. He later was said to have married a Soviet woman and had a son with her.

Blake embraced his new life in Russia with a new name: Giorgi Ivanovich Bekhter. Early on, he naively planned to drive across Russia in his gifted Volga. “At the time, I knew very little about Russian roads,” Blake later said.

Instead, Blake remained in his wooded dacha outside Moscow, reading Gogol and Chekhov. He described his life as a Muscovite as happy and peaceful.

Contemplating his legacy on his 90th birthday, Blake said he had no regrets.

“I do not believe in life after death,” Blake told the Rossiyskaya Gazeta, the official government newspaper in 2012.

“As soon as our brain stops receiving blood, we go, and after that there will be nothing. No punishment for the bad things you did, nor rewards for the utterly wonderful.”