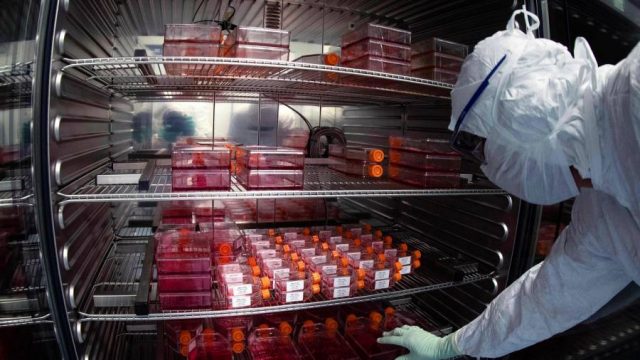 thesun.ie– A NEW Covid vaccine that the UK has ordered 60m doses of has flopped at the first hurdle and now won’t be available until the end of 2021.

The elderly did not produce a strong immune response to Sanofi’s vaccine in early trials.

In theory this would mean they would not be protected from disease.

But scientists believe they will be able to improve the formula and try again.

It’s likely to push back the final results of trials until the end of 2021, after initially being expected in the first half of the year.

The Department for Business, Energy and Industrial Strategy previously said the jab could be given to high-risk Britons as early as the first half of next year, if it passes trials.

There are high hopes for the Sanofi vaccine, developed in partnership with the drug giant GSK.

The companies have the largest manufacturing capabilities in the world, and claim to be able to produce one billion doses a year.

The UK secured a deal for 60 million doses in July, enough for half the population if given in two doses, rumoured to cost £500 million.

At this point, ministers had no idea if any Covid vaccine candidate would work, but appeared to place bets on the Sanofi one.

Therefore the delay will come as a huge blow in the fight against the deadly virus.

However, Covid vaccination is now well underway in the UK, after the Pfizer/BioNTech jab started to be given out at NHS hospitals.

Results of phase 1 and 2 trials announced by Sanofi/GSK on Friday showed “a low immune response in older adults ” aged over 50 years old.

The elderly are the most at risk of severe Covid-19 and death, and so it is crucial scientists work to find a jab that can protect them.

Adults aged 18 to 29 years old did show a response to the vaccine, however.

Scientists said it was not a surprise that the vaccine didn’t work in the older groups because their immune system is slower, and therefore needs a higher dose to work.

But it was still a dissappointment, nonetheless.

Roger Connor, President of GSK Vaccines, said in a statement: “The results of the study are not as we hoped.

“Our aim now is to work closely with our partner Sanofi to develop this vaccine, with an improved antigen formulation, for it to make a meaningful contribution to preventing Covid-19.”

Dr Gillies O’Bryan-Tear, of the Faculty of Pharmaceutical Medicine, said: “Older adults are known to have lower immune responses to such vaccines and this may be overcome by either repeated injections (prime- boost approach) or by increasing the antigen dose within each shot.

“In this case the companies seem to have decided to increase the antigen dose within the shot.”

“But when in phase 1 and 2, drugmakers test tolerance and one cannot test strong dosages.”

He added: “I would think Sanofi and GSK will be able to improve their vaccine.”

The phase 3 study of the vaccine – the largest part which concludes if the virus prevents a person getting sick with Covid-19 – was due to start this month.

However, earlier phases will now need to be re-done, starting from February 2021.

The phase 3 studies will start between March and June of 2021, if the results are positive, which would lead to the data being given to regulators in “the second half of 2021″.

Dr O’Bryan-Tea said: “It is disappointing that the GSK/Sanofi Covid vaccine, coming as it does from one of the power houses of vaccine science in the world, has not performed as well as hoped for in the phase 2 study.

“It is a setback in the world’s efforts to control the pandemic, but underlies the importance of having multiple options in addressing this pandemic.”

The news follows the start of the Covid-19 vaccine roll out in the UK, using the jab from Pfizer and BioNTech.

It was given regulatory approval from the MHRA last week, and already “tens of thousands” of Britons have been given the jab since December 8, the Health Secretary Matt Hancock said last night.

“As of today, we are vaccinating in 73 hospitals across the UK, tens of thousands of people have had the jab,” he said at a Downing Street news briefing on December 10.

The UK is the first country in the world to have an approved vaccine for the coronavirus.

And the Oxford/AstraZeneca jab could be the second approved within the coming weeks, with the MHRA currently looking at the data from trials.

The UK government has ordered 340 million doses of Covid-19 vaccines from several manufacturers, 40 million of which are from Pfizer and 100 million from Oxford.

The UK should have three or four vaccines against Covid-19 by the middle of next year, England’s chief medical officer has said.

Professor Chris Whitty told the Commons Health and Science Committee on December 9 that he expects to have a “portfolio” of several vaccines by the middle of 2021, but advised that the rollout process should still proceed “carefully”.